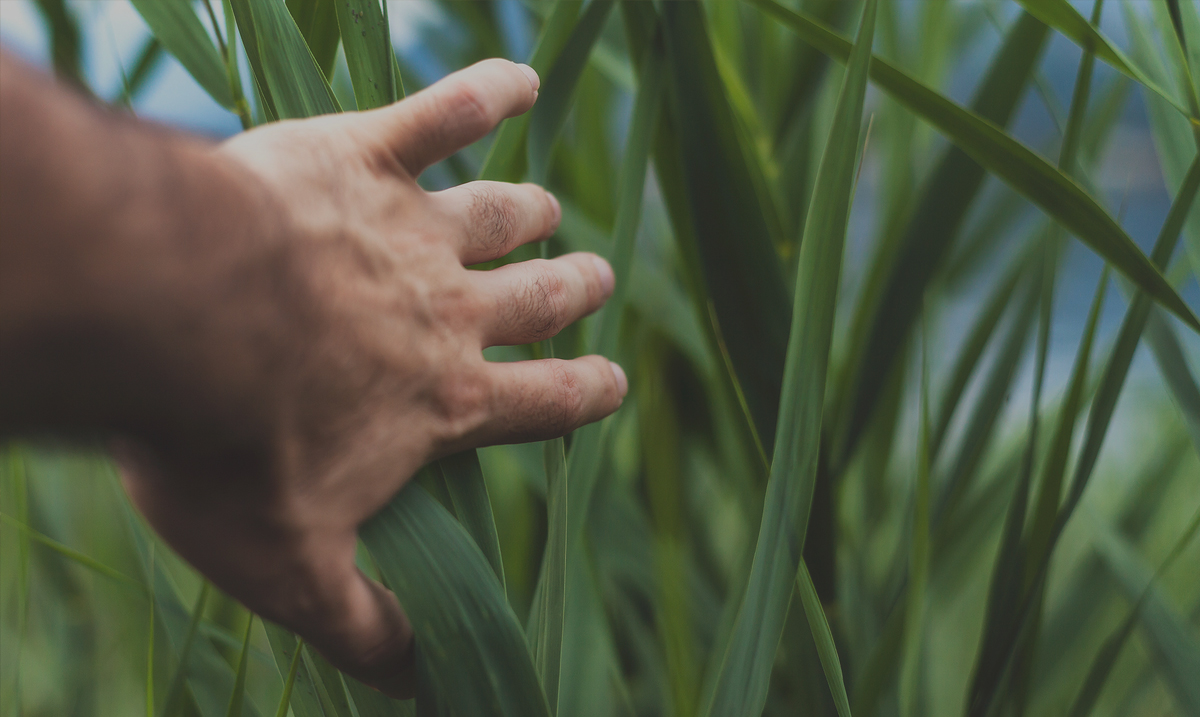 The upcoming Living Soils Symposium taking place in Montreal from March 28-31, 2019 is an engaging and information-packed event focusing on our incredibly crucial and principal ally, soil. Why soil? Soil is the origin of all life and plays a critical role in mitigating climate change by being the largest carbon sink on land. Unfortunately, according to the United Nations (UN), a stunning 33% of soils worldwide are severely degraded, resulting in a vast array of negative consequences. One grave fallout of degraded soil is that it actually loses its carbon content by way of releasing it into the atmosphere as carbon dioxide, therefore exacerbating climate change. How come so much soil is degraded? For too many years now, our incessant reliance on degenerative land management practices, including tillage, deforestation, and the misuse of pesticides and chemical fertilizers have negatively impacted our soils.

Fortunately, however, through regenerative land management practices we can have a positive impact on our soil, building and nourishing its ecosystem and biology, thereby encouraging soil’s inherent proclivity to drawdown atmospheric carbon. Such regenerative land management practices that increase living soils have the potential to not only store billions of tons of carbon annually, but also help to restore biodiversity, tackle desertification and water scarcity, intensify agricultural productivity, and alleviate political and social instability as well as mass migration due to desertification.

The four-day, bilingual (English and French) Living Soils Symposium brings together a diverse array of people, including farmers, academics, scientists, NGOs, government delegates, activists, entrepreneurs, students, and businesses, to explore the paramount role living soils play in contending with some of the most pressing environmental and social justice issues on the planet. This symposium strives to increase knowledge and awareness about soil health and regeneration, as well as to expedite networking and the cross-pollination of innovative ideas regarding soil regeneration. The symposium also serves as a fantastic backdrop for meaningful, thought-provoking interdisciplinary discussions connecting the scientific, practical, economic, political, and social aspects of soil regeneration.

Meet some of the speakers that will be presenting at the Symposium:

Jean-Martin Fortier is a farmer, educator, and award-winning author of the highly influential and best-selling book, The Market Gardener: A Successful Grower’s Handbook for Small-Scale Organic Farming. He is a passionate proponent of strong local food systems and has amassed a wealth of knowledge and experience in organic, biologically intensive, small-scale, ecological vegetable production. Through his inspiring book and the hundreds of classes, workshops, seminars, and conferences he has been involved in, he has empowered legions of people to pick up the broadfork and create their own ecological, human-scale, profitable farm.

David C. Johnson is a microbiologist, professor and director of sustainable agriculture at New Mexico State University. His pioneering research concentrates on soil microbes as the key players in soil regeneration and carbon sequestration. Together with his wife, Hui-Chun Su Johnson, he developed an innovative composing process that successfully transforms manure from industrial dairy cows into microbially-diverse, fungal-rich compost. This compost, in turn, increases both soil productivity and the amount of soil carbon sequestered, validating the great potential of microbes for healing the planet.

Derek Lynch is an agronomist, professor, and former Canada Research Chair in organic agriculture (2005-2015). As professor of agronomy and agroecology at Dalhousie University, he teaches soil and field crop management, as well as agroecology, at both undergraduate and graduate levels. His research focuses on the influence that cropping and farming systems have on productivity, soil carbon and nutrient dynamics, and soil health and biodiversity.

Jackie Milne is the president and founder of the Northern Farm Training Institute, a holistic farm and educational centre designed to empower northerners, as well as bolster communities and develop sustainability through local food production. She is a Hay River Metis woman and has been successfully market gardening for over 25 years. In recognition of her influential work in finding real solutions to Canada’s Northern food issues, she was awarded the Meritorious Service Medal from the Governor General of Canada in 2016. She is also the leader of the first Canadian Savory Hub, an international network of regenerative agriculture teachers committed to Holistic Management.

Laura Ortiz Montemayor is a social entrepreneur and the founder and CEO of Social Ventures Exchange (SVX), an impact investment consulting firm in Mexico. She is passionate about regenerative agriculture, systems thinking, decentralized systems, and is devoted to ensuring that capital serves humanity. Her work has focused on propelling social, economic, and environmental justice through impact investment and social entrepreneurship education, and consulting.

Hugues Morand is the Acting Deputy Director in the Environmental Policy Division of Agriculture and Agri-Food Canada. Between his educational background in agricultural economics and his experience in the world of politics, he brings valuable insights into discussions concerning how soil regeneration is implicated in the political agenda.

Didi Pershouse is an author, speaker, consultant, and founder of the Center for Sustainable Medicine and the Two Rivers clinic. She is devoted to emphasizing the profound connections between soil health, human health, microbiomes, and the climate. Growing up in a family of high-tech medical pioneers working in radiation and brain surgery, she witnessed first-hand the destructive effects that such practices regularly caused. This lead her to establish a practice and theoretical framework for systems-based ecological medicine, restoring health to people as well as the social and ecological systems around them. She is the author of The Ecology of Care: Medicine, Agriculture, and the Quiet Power of Human and Microbial Communities, and Understanding Soil Health and Watershed Function.

Becky Porlier is co-founder and director of the Upper Canada Fibreshed, a not-for-profit facilitating an agricultural textile exchange in Ontario. She completed her Master’s degree in Capacity Development and Extension at the University of Guelph, where she focused on food security and rural development. Since finishing her studies she has been immersed in the local food and fibre movement, and is an avid gardener and wild food forager.

Calla Rose Ostrander is an independent consultant and activist specializing in climate change and agricultural policy, science communications, and movement building. She has helped to advance carbon farming, compost production and climate-beneficial material economies in California, Colorado, New Mexico, Montana and Texas. She is the co-author of the first Climate Action and Adaptation Plan for the City of Aspen in Colorado, and is a Strategic Advisor at the Marin Carbon Project in California. Prior to her work in agriculture, she served as the Climate Change Projects Manager for the City & County of San Francisco, was Climate Coordinator for the Canary Initiative at the City of Aspen, and the Communications & Development Fellow for Rocky Mountain Institute.

Joel Salatin is a farmer, lecturer, and author of numerous books including Folks, This Ain’t Normal, You Can Farm, and Salad Bar Beef. A self-described “Christian-libertarian-environmentalist-capitalist-lunatic-Farmer,” he raises livestock using holistic methods of animal husbandry that are environmentally responsible, ecologically beneficial, and agriculturally sustainable on his Polyface Farm in Swoope, Virginia. He embraces an agricultural paradigm shift that sees plants and animals as partners rather than units of production: ”Let the plants and animals fill their natural niche with full distinctive expression. The starting point for animal husbandry is to let the animal express its uniqueness.”

Marie-Élise Samson is an agronomist and PhD candidate in soil conservation at Laval University, where she has been examining carbon and nitrogen accumulation and restoration in soils undergoing different agricultural practices. As a result, she aspires to determine the best agricultural practices for maximizing carbon sequestration in agricultural soils. In recognition of her critical environmental contributions in reversing climate change, she was awarded Equiterre’s Laura Waridel Bursary in 2018.

Ethan Soloviev is a farmer, author, and the Executive Vice-President of Research at HowGood.com, where he manages the world’s largest database of food, beauty and cleaning products. His work with Fortune 100 retail and Consumer Packaged Goods (CPG) companies integrates on-the-ground agricultural expertise with sustainability-driven market insights. Never too far from his field, he grows apples and raises sheep in upstate New York. He is the author of Levels of Regenerative Agriculture and Regenerative Enterprise: Optimizing for Multi-Capital Abundance.

To connect with these leaders of the regenerative movement, join us at the Living Soils Symposium 2019!

Come discover the role you can play in regenerating soil health.