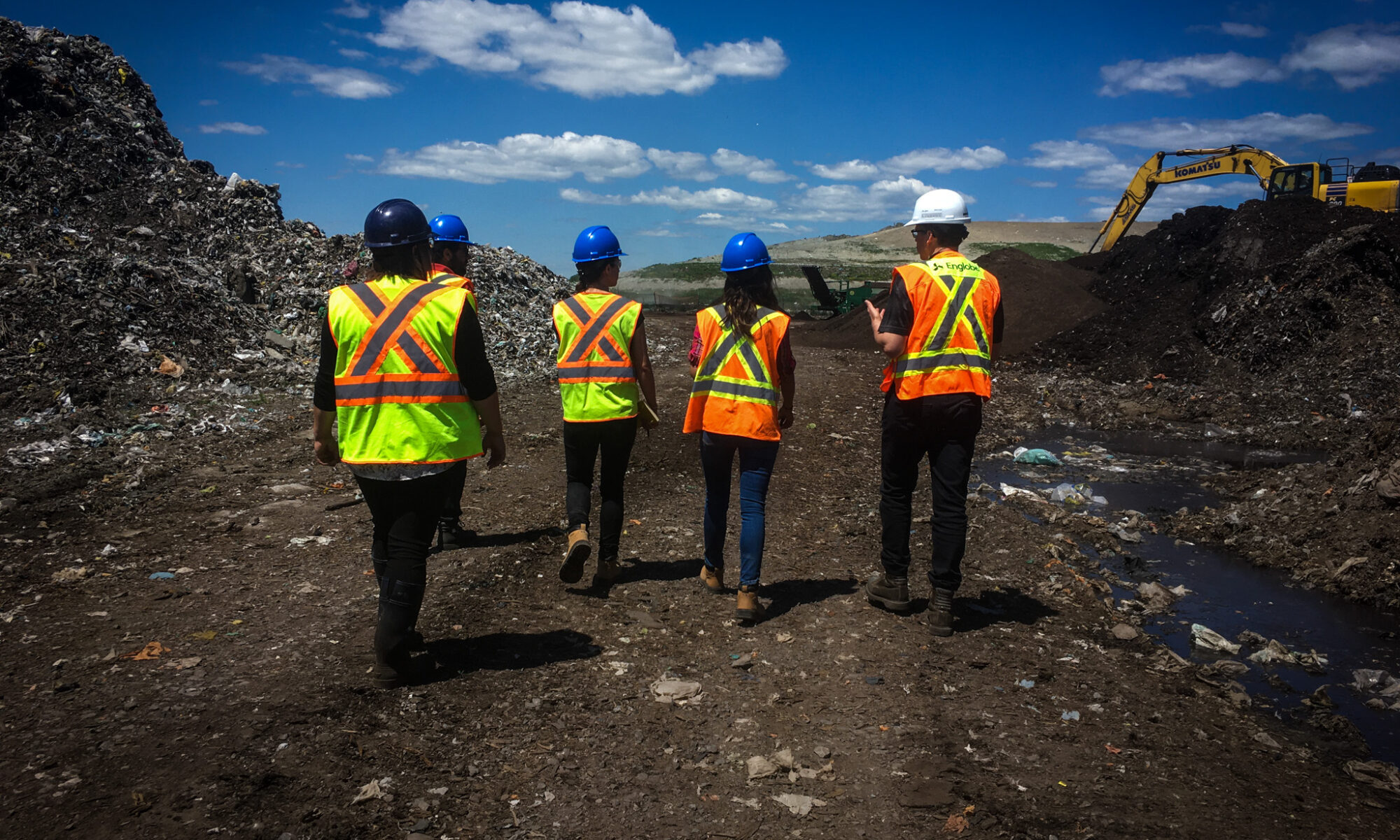 Earlier this summer, the Regeneration Canada team visited one of the composting sites from our members and partners of the Living Soils Symposium, Englobe. We went to the Lachute site to find out what happens to our food scraps when they end up in a composting site. Among its various activities, Englobe processes organic materials such as green residues, table waste, sludge from sewage treatment plants and agrifood sludge. These materials are then transformed into potting soil and compost. We were welcomed by Serge Loubier, Director, Business Development and New Products and Audrey Pagé, Control and Quality Inspector, who introduced us to the world of composting throughout all of its stages. The Lachute site receives an average of 30,000 to 40,000 tons of organic matter from several municipalities with which they have agreements with. They ensure that it is processed and converted into a product that can be used by horticulturalists, farmers, and citizens.

But why compost? In Canada, organic matter represents 40% of residential waste. When compost is used in agriculture, it promotes microbial life in the soil and offers a host of ecosystem benefits: better water retention, more potential for carbon sequestration, and reduced pests. We should all be composting our food waste and yard waste. For this to happen, all residents should have access to a municipal compost system as well as the resources needed to sort organic waste properly.

How Does it Work?

Once the collection is complete, the trucks head to Lachute where they unload the materials collected from brown bins into a large pile. Serge explains that they work with a “pile” system. This means that the compost moves from pile to pile before being converted into a final product. This process can take about a year. When necessary, the piles are turned over for better ventilation and to speed up the decomposition process. They must also maintain a temperature of 50 to 70 degrees. Maintaining this temperature will destroy harmful microorganisms and ensure the compost’s sanitization. 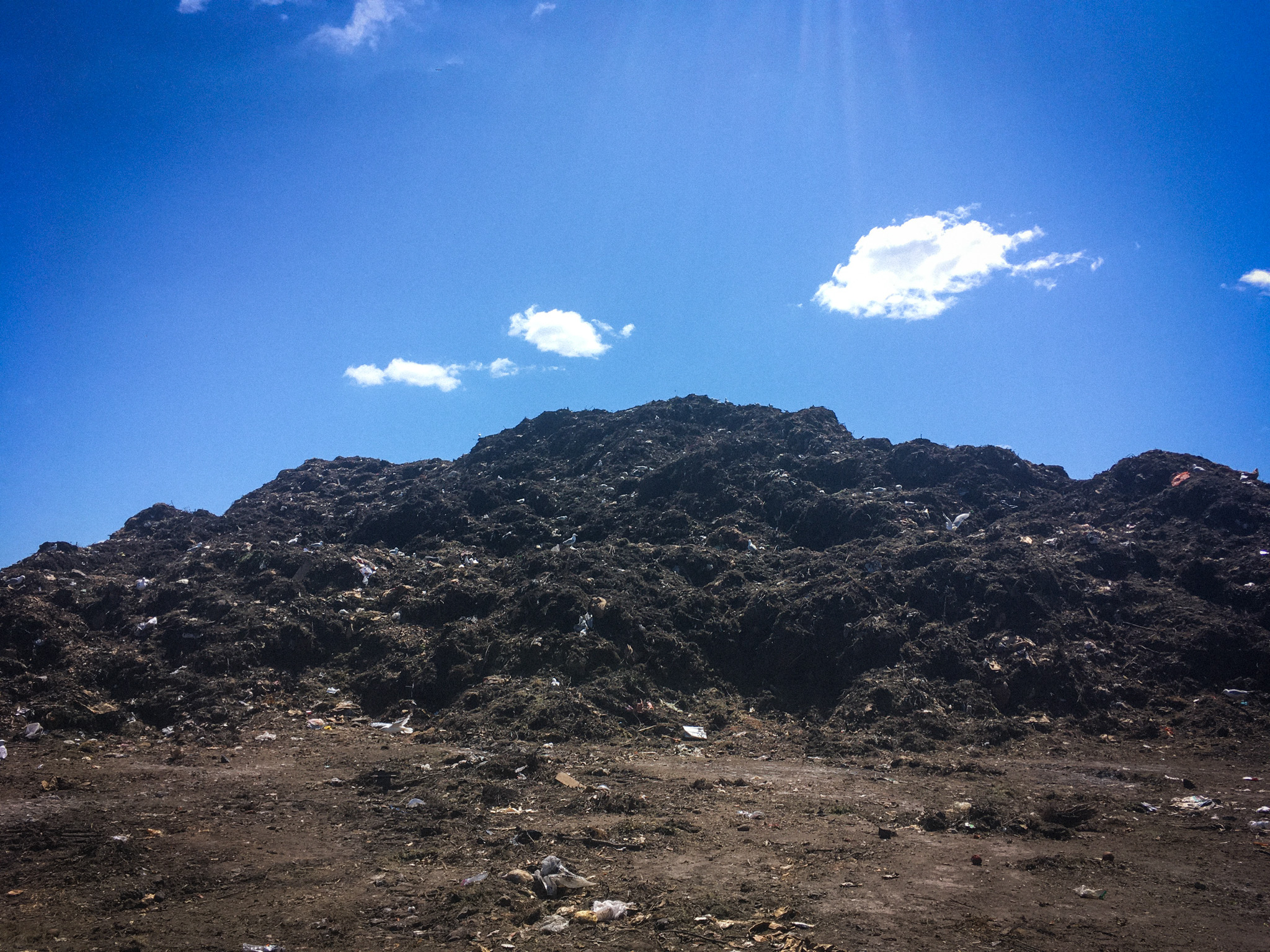 Upon the compost’s reception, a first visual sorting is carried out to remove foreign bodies. This is an important step since mistakes are human. During our visit, we witnessed the unloading of non-compliant material. A mixture of municipal waste and compostable material was added to the compost pile by a truck driver who did not check the contents of his truck the morning he picked up what he thought was only organic material destined for the compost site. Mistakes at the collection stage can happen from time to time. The first visual sorting is very important in order to ensure that the materials are compliant with Englobe’s standards. 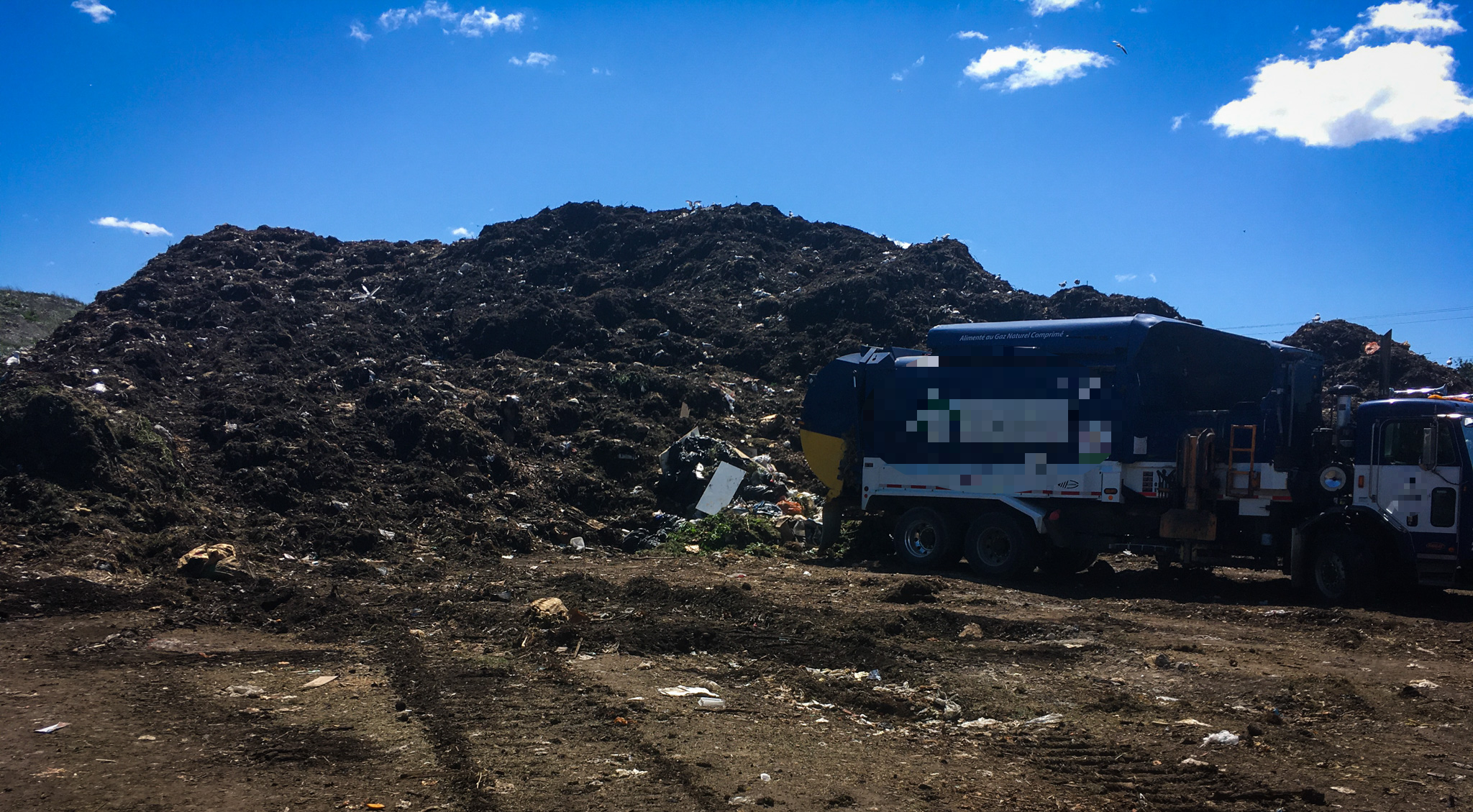 After a few months of treatment, there is a primary screening of the materials in order to remove any larger debris. During this step, there are mainly plastic bags in the materials to be removed. We’ve witnessed this situation firsthand. Among the piles of compost around us, we were immediately struck by a pile that was almost entirely made of plastic bags that the Englobe team had to remove from the piles of compost. This pile of bags was removed during the sifting process and is waiting to be sent to a landfill. On average, Englobe employees remove about 5% of foreign matter from the materials they receive.

The Importance of Quality Home Compost

Serge explains that raising awareness among citizens is essential in order to ensure quality compost. Our table waste, fallen leaves, garden waste, and all of the other materials that we put in our brown bins inevitably end up in the potting soil or compost that companies like Englobe produce. A good example that underlines the importance of the citizen’s contribution in this operation is fruit and vegetable stickers. Since they’re too small to be removed during the sorting and sifting stages, fruit and vegetable stickers can end up in the compost or final potting soil. “It’s your materials that are recycled. If you’re concerned with the complete recycling loop, a simple gesture such as removing the stickers from our fruits and vegetables helps guarantee the quality of the compost,” explains Serge. In short, the quality of compost depends first and foremost on citizens’ understanding of organic waste management and their commitment.

Several municipalities take the soil and compost that Englobe produces with organic waste to use it in their public spaces or to give it back to their citizens. This process emphasizes the complete loop of the composting process. The compost comes from the soil and returns to the soil. Several municipalities, such as Sainte-Agathe-des-Monts, Lac-Supérieur and Oka, have an agreement with Englobe to give the final materials, either soil or compost, back to their citizens. This conversion highlights the importance of properly managing the waste we dispose of in our brown bin. As Serge points out: “it’s very much a circular economy”. Compost is often a misunderstood and abstract practice for many citizens who don’t know exactly where their materials are recycled and how they end up being composted. “That’s why we like to have citizens visit in order to show them what we’re doing. It becomes much more tangible afterwards.”

What Can We Do as Citizens?

What’s most important is to make sure that what we put in our brown bins does indeed go into the compost. Organic waste in landfills create up to 25% more greenhouse gases since they generate methane. Sorting table waste into compost bins therefore greatly contributes to the reduction of greenhouse gases in landfills. According to Recyc-Quebec, Quebec generates approximately 3.9 million tonnes of organic matter and only 1.1 million tonnes are recycled. The remaining 2.9 million tons are either buried or incinerated. Managing all of this is no easy task. To help citizens see more clearly, Recyc-Québec has created the CA VA OÙ? application, which guides users in the management of organic waste according to the municipality of their choice.

Compost in the Agricultural Sector

Despite the benefits that compost can have for soil health, Serge explains that the compost market is mostly dominated by horticulturalists. Minister Charette also recognizes the potential for its use in the agricultural sector: “we realized that barely 4% of agricultural land in Quebec is used to receive compost. There is an immense potential”. In the agricultural sector, the benefits of adding compost will allow for better retention of fertilizers, improved infiltration and water retention, and the benefits of organic carbon in the soil. “The positioning and use of an agent or an amendment that will improve soil health is part of a range of practices,” explains Serge. For a farmer who wants to invest in the health of his soils, adding compost is a long-term investment to enrich the microbial life of his soil. Indeed, the benefits are often not seen until after a few years of use. The contribution of microorganisms in the compost will play the role of inoculum and will contribute to a soil that is more resistant to extreme weather changes and to climate change. The challenges in the agricultural sector are therefore to have well-informed users who want and have the means to invest in the improvement of their soil in the medium term. As long as soil health is not a concern for everyone involved, the use of compost will be very minimal. However, Serge remains positive about this challenge: “we’re starting to have more and more interest from market gardeners who want to integrate these practices.”

In the end, composting is a social project. In Canada, we have one of the highest waste rates per capita, reaching 33.4 million tonnes per year. While organic matter represents 40% of our waste, we have the potential to recycle around 13 million tonnes of waste into potting soil or compost. If we really want to reduce our impact on the environment, a simple gesture like putting an apple core in the compost is one of the first concrete actions we can take.