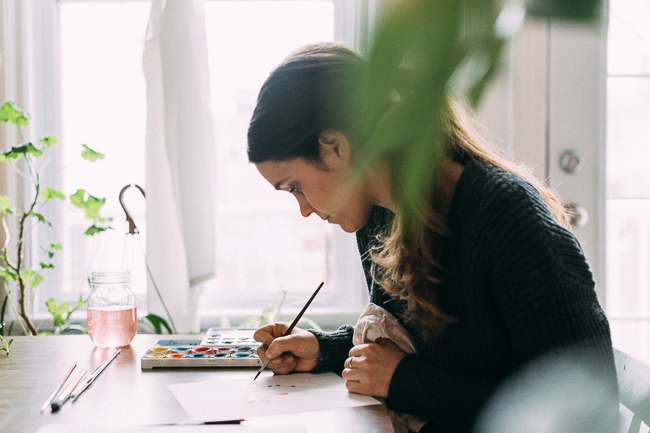 She never imagined that drawing would be part of her destiny. Better-known as her pseudonym Laucolo, Laurence Deschamps-Léger had never really considered becoming an agri-food artist portraying the stories and seasons of local foods through watercolor and digital illustration.

From global to local

During her studies in international development, she specialized in agri-food systems under a social sciences umbrella. She believed her path would take her around the globe, focusing on food sovereignty issues with a political, anthropological and socioeconomic approach. Towards the end of her studies, she felt the need to return to her roots in Quebec, which had its own agri-food issues. According to Laucolo, it was in her hometown that her work took on full meaning for her. In 2012, she joined forces with Lufa Farms to contribute to this burgeoning start-up.

From blurred lines to a clear path

Through this work, she became aware that there was an impressive diversity of local fruits and vegetables in Quebec. Inspired by this variety of foods, her artistic story began to take shape on the Lufa Farms walls. Surrounded by family and friends who did not work in the artistic field, Laucolo did not see how it was possible to make a living by drawing.

She continued to work for several years, dedicating evenings and weekends to her precious illustrations. Increasingly passionate, she honed her knowledge by devouring articles and books on local agriculture in her “free time.” Little by little, Laucolo added feathers to her wings. Her first work was a calendar representing seasonal vegetables. It was a successful harvest for her – as an artist, she was beginning to see the light. A few months later, she left her job to devote heart and soul to her art.

When information circulates through a flow of fruits and vegetables

For Laucolo, agri-food is a way to recognize the many functionalities of agriculture, and it is an infinite source of inspiration that feeds each of her works. Drawing is a way of speaking: it is a language full of color, rather playful, and accessible. Through her illustrations, Laucolo can connect with people: it is a gateway to information sharing and discussion.

What’s better: a potato straight from a farm located on the South shore of Montreal or an organic but packaged potato (organic certification sometimes requires packaging)? For Laucolo, it is important to find variety and do your best. Today, mental shortcuts put a lot of pressure on consumers: “Okay, this year, we refuse sugar! The next year, we boycott avocados because they come from the Mexican cartels. Then after, we cut down on coffee because of the global crisis.” People are tired of being told what to do, and a sense of guilt too often taints their decisions. To get out of this rut, Laucolo recommends asking yourself the right questions; because eating is certainly a political and collective act, but it’s also important to vary your diet and to assume every bite.

The Living Soils Symposium – a dream incubator for Laucolo

In 2017, Laucolo had another hit at the first Living Soils Symposium. With her friend and partner Sara Maranda-Gauvin (co-founders of On sème), they realized with astonishment that living soils are effective carbon sponges that have the ability to reverse climate change. Fascinated by this new information, they added a course on soil health in a training they delivered at the Urban Ag Summer School at Campus MIL.

Laucolo is engaged in several other projects on living soils, including a partnership with Les Jardins de l’Écoumène and new illustrations representing life in the soil. Passionate about degrowth and inspired by the symposium, Laucolo also wants to offset her entire carbon footprint as her business evolves.

A diversity of artists will attend this year’s symposium!

To create a paradigm shift, we know that it is fundamental to change the beliefs that shape the hearts and minds of different groups of people. In addition to discussing with farmers and advocating for living soils,  we have the duty to create a social movement. The secret ingredient? Artists. They are spicing up our lives, they express themselves in a language that touches us, and they have the power to change our perceptions.

A variety of artists will color the Living Soils Symposium. Moe Clark and her group are going to jam in an atmosphere that will bring us back to our nomadic roots. Caroline Magar will be drawing, on the spot, the experience that will take place during the event. Jean-Marc Abela will make us dance and sweat with well chosen beats. And finally, Laucolo’s work will adorn the walls of Marché Bonsecours. Will you join the party?