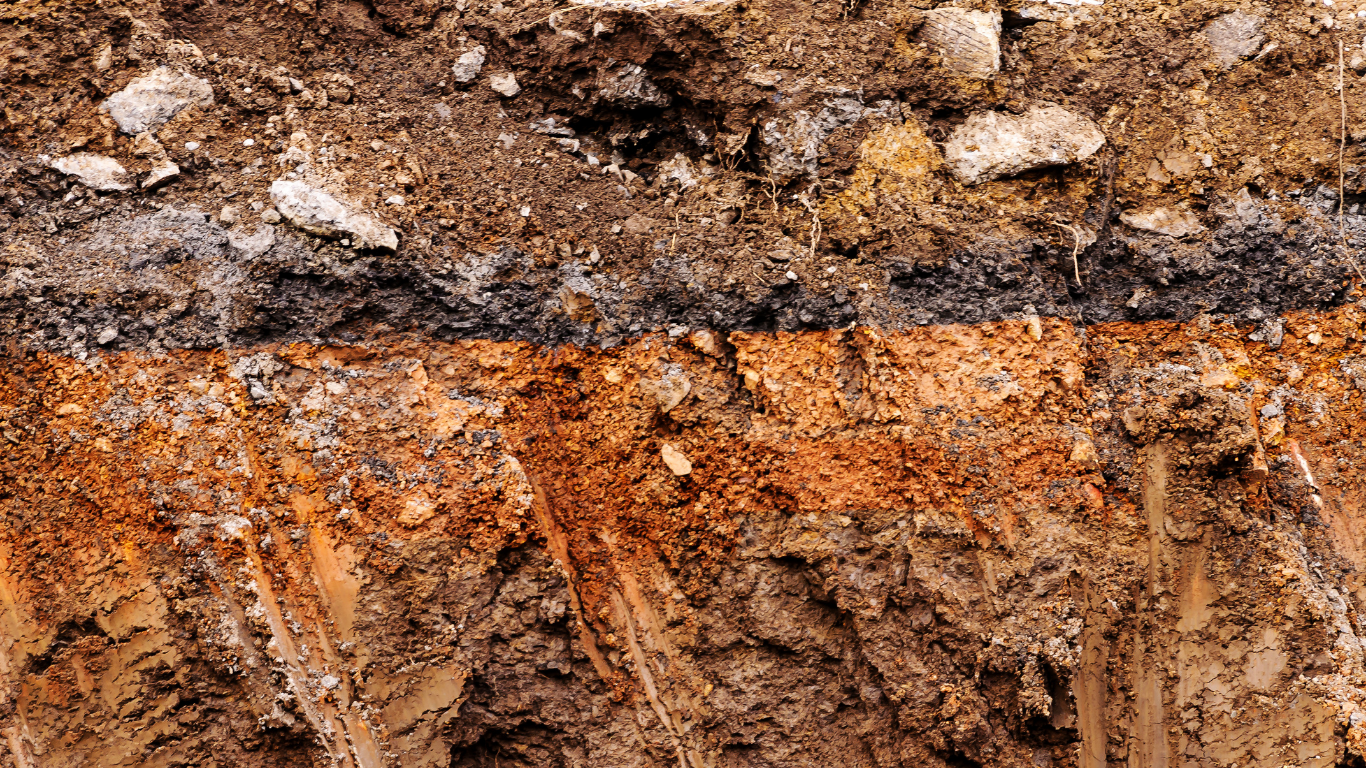 To obtain a soil profile, you have to examine the layers of a vertical cut into the ground. These layers show us distinct mineral horizons and organic soil deposits. It is a tool that allows us to understand pedogenesis – the process of soil formation that is regulated by the environment, climate, time, and human interactions. Soil horizons or layers might differ in colour, in texture or in a suite of other properties.

There are a few ways to understand how the soil is formed. According to Roy Simonson (1958), soil formation can be understood in two steps. First, soil is formed by the accumulation of parent material. Next, the horizons are differentiated by soil-forming processes such as additions, removals, transfers or translocations of materials and transformations. (Soils of Canada)

Another approach, proposed by Hans Jenny (1941) is to understand soil formation as being the result of five factors: climate, organisms, topography, parent material and time. These factors define the state and the history of soil systems, and are referred to as state factors. (Soils of Canada) 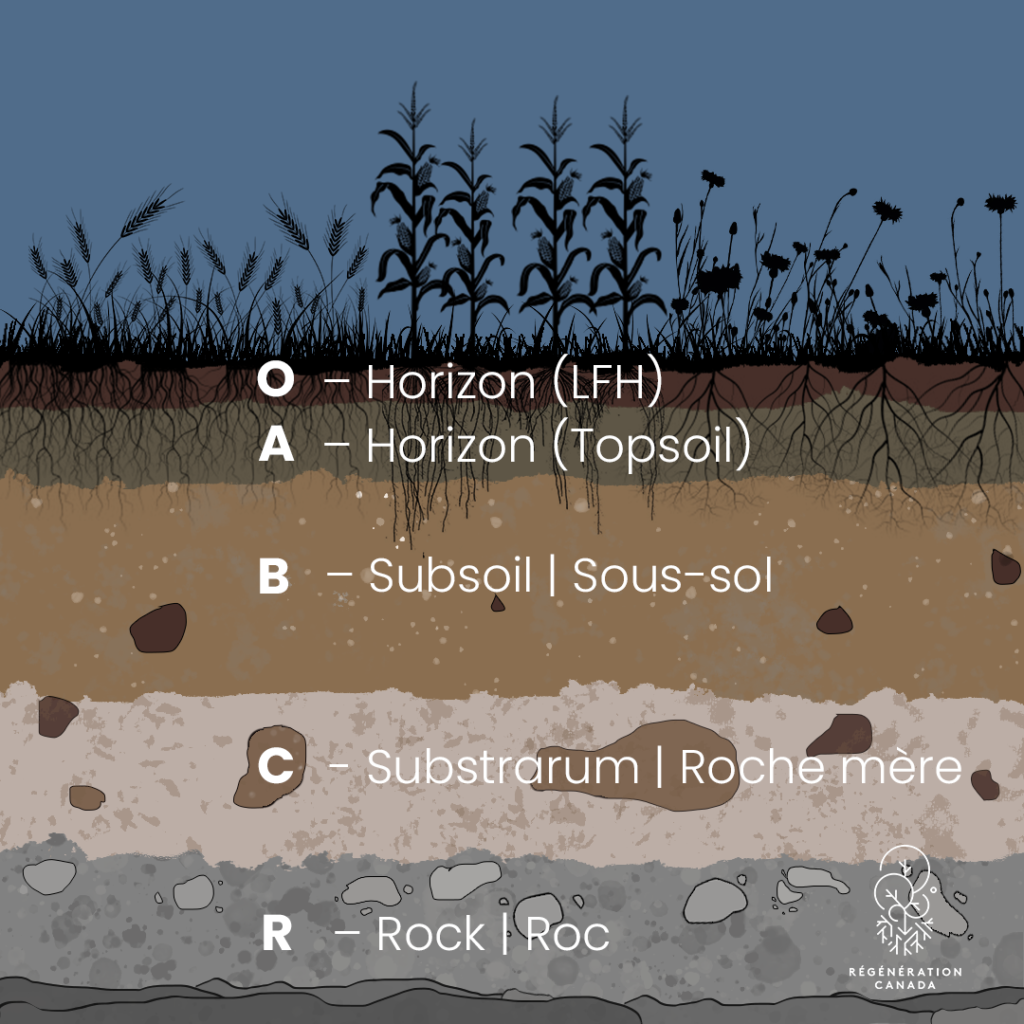 Why study a soil profile?

In Canada, the Canadian System of Soil Classification classifies soil into ten major orders such as brunisolic, podzolic and organic soils. On farms, soil profiles allow farmers and field experts to understand the history of the land and the impact of different management practices on soil such as compaction, water infiltration and root development.

Soil profiles can be conducted as a visual tool to observe the following soil characteristics:

1) Impact of tillage and other management practices

These horizons are characterized by various properties, notated with suffixes. For example, in the B mineral horizon layer, you can find an accumulation of iron and/or aluminum (Bf), an accumulation of clay (Bt) or mottling and gleying due to water saturation (Bg) and so on. There are many possible suffixes per soil horizon.

For more information, refer to this resource from Soils of Canada.

All life on Earth depends on soil. The top two layers, the O and A layers, are where most activity happens, namely, biological activity and nutrient cycling. This is where the most accessible nutrients are available to plants. 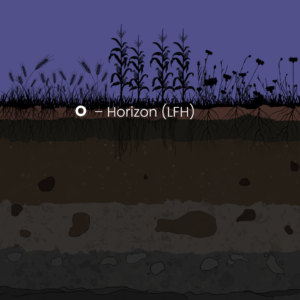 The first horizon is the O or LFH layer – the organic horizon. It is composed of litter and organic matter (OM) in different stages of decomposition. The depth of this layer depends on how the soil forms (pedogenysis), the amount of vegetation and the tillage practices used. In some agricultural soil, the O layer has become integrated with the A layer and is not distinct.

There may be less biological activity in the three bottom soil horizons, however a large portion of stored minerals are found there. 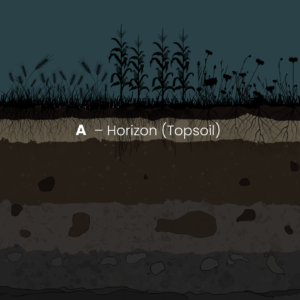 The A horizon (commonly called topsoil) is the top layer of the mineral horizons and consists of minerals from parent materials mixed with incorporated organic matter. It is usually dark in colour and contains more organic matter towards the top. The A horizon is home to a myriad of soil microorganisms and fauna that interact with plant roots. This horizon is very important for determining soil fertility because of the presence of biological activity and organic matter. 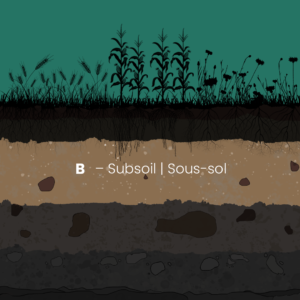 The mineral horizon B is characterized by accumulated organic matter and minerals. This mix gives the horizon its brown colouring. We can also observe accumulation of clay and rusty-coloured soil resulting from iron oxidation. Rain water percolates through the soil, bringing minerals with it from the above horizons, which then accumulate in the B horizons. This process is called illuviation. Other potential characteristics of the B horizon include accumulation of iron and/or aluminum (Bf), presence of slickensides (Bss), slight colour or structural changes from the parent material (Bm), among others. 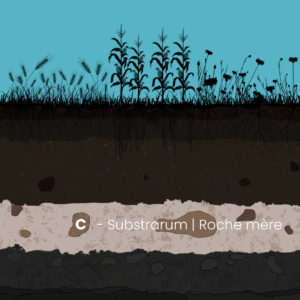 The C horizon is made up of  original parent material which has been continually altered throughout thousands or millions of years (weather events, glaciation, etc.). There is no organic matter in this horizon, only minerals. Other potential characteristics of the C horizon include accumulation of Ca and Mg carbonates (Cca), accumulation of soluble salts (Cs), presence of slickensides (Css), among others. 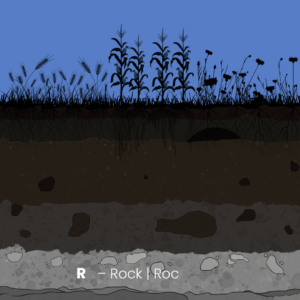 The bottom of the soil profile, or R layer, is composed of consolidated bedrock or a continuous mass, depending on weathering events. This is the final layer in the soil horizons.

The Canadian System of Soil Classification