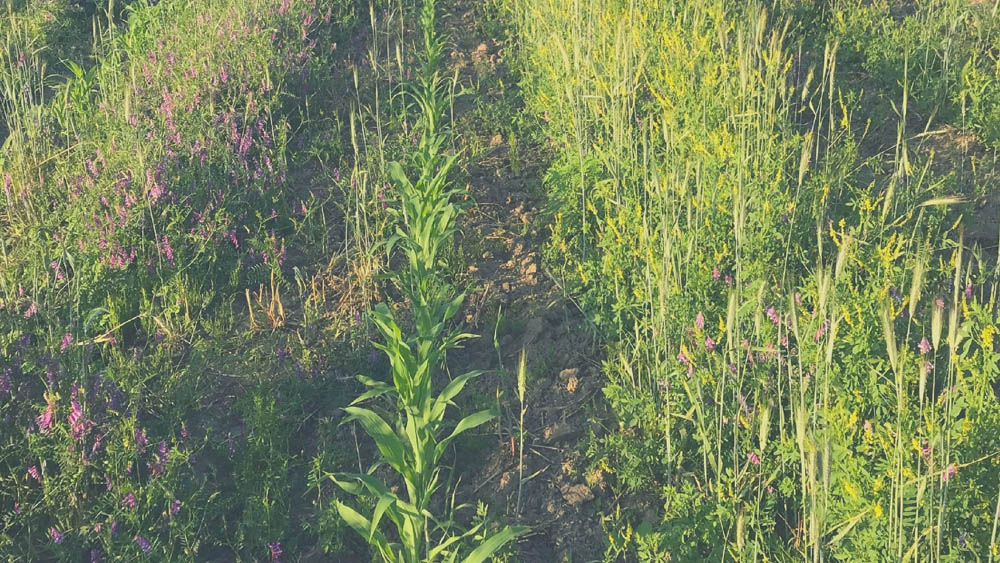 Not your typical corn field

Sébastien Angers’ corn fields don’t look like your typical corn fields. In fact, if you don’t look carefully at first glance in early July, you might not notice that it is a corn field. Sebastien is trying something difficult. He wants to grow organic corn with no herbicide and as little disturbance to the soil as possible. He was inspired by the work of a group of American farmers, who are experimenting with planting half the amount of corn in the field and planting a wide band of mixed cover crops in between. And he has recruited 14 other Quebec farmers with a passion for cover crops to try the experiment along with him.

Inspired by a group of farmers from Iowa

The Practical Farmers of Iowa is an organization which brings together farmers, both organic and conventional, to develop more sustainable farming methods through farmer led research and peer learning. Rows of corn are generally planted 30 inches apart, but some of the Iowa farmers have been experimenting with planting it 60 inches apart and planting cover crop mixtures in the wide band between the rows of corn. They have found that by doing this they can get the same yield, or only slightly less in the first year. This is because there is more sunlight available to the plants as they start out in early summer. This enables farmers to get a more robust growth of the beneficial cover crops, give them a longer time to grow and root deeply, providing more benefits to the soil and the plants.

Why not try it in Quebec?

Sebastien participated at an event with the Practical Farmers of Iowa last August and came away inspired to try it in Quebec. One reason the idea is so appealing, aside from increasing soil fertility with a lot less inputs, is that corn is by far the most profitable cash crop. With this system, the farmer can grow corn two years in a row in the same parcel by planting it the second year where the cover crop band was. If the yield is the same or nearly the same the first year, plus the cost of inputs is reduced, plus corn can be two years in the same field, the profit per hectare goes up.

He shared the idea with a group of pioneering Quebec farmers who have been experimenting with cover crops. This season a group of 15 farmers, half organic and half conventional, are growing at least one hectare of corn at 60 inches with a corridor of mixed cover crops in between. Each one exercises his creativity in the selection of cover crop mixes and the group will share their data and learn together.

Using weeds as an indicator for the right cover crop: listening to nature

Sebastien himself has many hypotheses to test out about how to maximize the use of cover crops. He has noticed that the dominant weeds in his field seem to come from plant families that are different from the cash crops. He wonders if nature isn’t trying to balance out the soil ecosystem. So, he is selecting cover crop mixes from the same families as his dominant weeds, to see if they will suppress the weed species.

Between finding the right cover crop mixes to occupy all the right niches, finding the optimal time to plant them and the optimal planting method, there are many years of work (play?) ahead before the whole system is fine tuned and well understood. Fortunately, with 15 farmers working together to collect data, the job will progress faster and be more fun!

Sébastien Angers is a member of Regeneration Canada. Join our network to discuss cover cropping and other regenerative practices with our members!