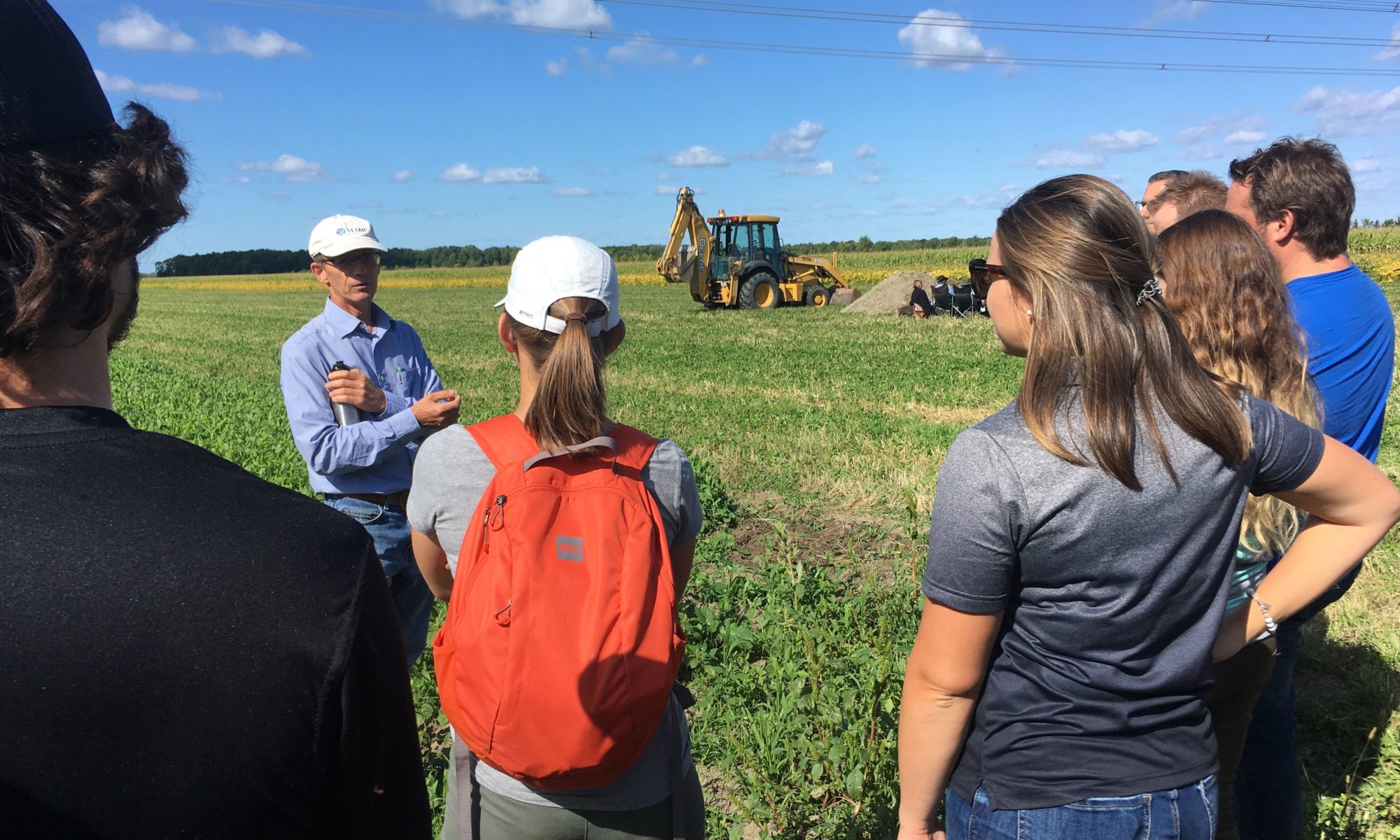 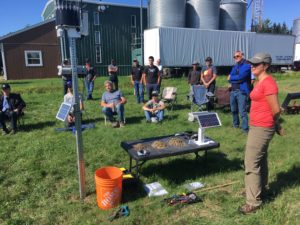 Club Action Billon is a group of farmers who support one another to learn how to best improve the health of their soil. For more than twenty years now they have been organizing events which bring farmers together to share their experience and learn about new innovations. At first 20-30 farmers would likely show up at one of these day long events. But lately, the topic of soil health has been attracting more and more people. This year there were over a hundred people at the annual event.

This past September 16, Régénération Canada co-hosted the day long workshop with Club Action Billon in Les Cèdres, Québec at Ferme Longprès. Ferme Longprès is a 1500 acre family farm run by two generations of the Dewavren family. They are an organic farm growing a diversity of field crops with minimal tillage and cover crops. With such a large group we had to divide up into four groups and circulate between the different presentations. In the field the 4 topics were:

Four companies selling data technologies, Hortau, Precision Planting, Karnott, and Horoma were there to show their offerings and discuss the benefits. Various types of sensors are able to collect data in the field on things such as soil humidity, temperature, pH, organic matter, nitrogen levels, phosphorus levels, biomass density, etc. What is the benefit? Having this information can help farmers reduce inputs, treat problems before they become serious, and have more accurate feedback when they try new things. It also enables farmers to work together to share data from a larger sample. The more data collected, the more accurate and meaningful it can be.

Not being a boy who loves tractors and machines, I was in the minority for the group who attended. So I have to say I did not fully appreciate all the nuances of the presentation. What I did appreciate is that the standard farming machinery is not adapted to the innovative farmers who are working with regenerative methods like no till, strip till, minimal till and cover crops. Many farmers, including the Dewavren family are ingenious at adapting equipment to facilitate their methods. They use the lightest tractors possible to avoid compaction, which would undo the benefits of their soil building. One of these days, there will be enough interest in regenerative methods so that farm equipment will be available for less ingenious farmers to get what they need.

Diagnosing your soil with a soil profile 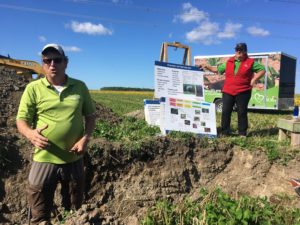 The marvelous MAPAQ (Quebec Agriculture Ministry) Soil Caravan was on hand with super stars, Odette Ménard and Louis Robert, to talk about the benefits of doing a soil profile to understand what your soil needs. A soil profile involves digging a hole in the field about a metre deep and looking at what is happening with the soil horizons. How deep is the topsoil? How far down can you find roots? How are the soil aggregates? And very importantly, where is there a layer of compaction? Too many agronomists presume that a drainage problem will be solved by installing expensive drainage tiles when the real problem is compaction caused by going on a wet field with heavy equipment. One of the least understood and most common problems is not lack of nitrogen, but lack of oxygen from compacted soil. This can be remediated by drilling deep holes and planting a cover crop of mustard which goes deep quickly, then leaving the field for a year. The best yields come from the fields that use the least equipment and the least inputs.

Tomas Dewavren guided us on a tour of his fields. He does not use manure as a nitrogen source, instead he gets all his nitrogen from his cover crops and his rotations. The fields are in narrow 36 metre bands and they do a rotation of corn, soya, wheat and cover crop. Clover is sown between the rows of wheat and is cut down in June after it flowers.

Two more presentations were given to the whole group over lunch time. I presented Regeneration Canada Petition to the political candidates to create programs supporting regenerative agriculture as a climate solution. Innovative farmers like these ones are taking the risks of transitioning to farming methods which can actually help all of society by removing excess carbon from the atmosphere. We believe that the federal government should support them by creating programs which help them to de-risk the transition and compensate them for the ecosystem services they provide to society.

Arbre-Évolution followed with a presentation about how they are channeling funds from voluntary carbon credits and paying farmers to plant trees on their farms around waterways. Farmers are paid for the equivalent of the yield they are giving up to have the trees on their land. They have to leave the trees there for at least 30 years and Arbre-Evolution maintains them. Eventually they can harvest the wood if they like.

The pioneering farmers and consultants who attend events like this are leading the way to changing the paradigm in agriculture. They are opening the path for those who will follow and they are the risk takers. We owe them a lot, which is why we believe that the government and the rest of society should support them, to make it easier and more certain for those who will follow. But the path is not only challenging; it is also rewarding. At an event like this one, the passion and the camaraderie that is shared gives energy to everyone. It is what keeps us going.