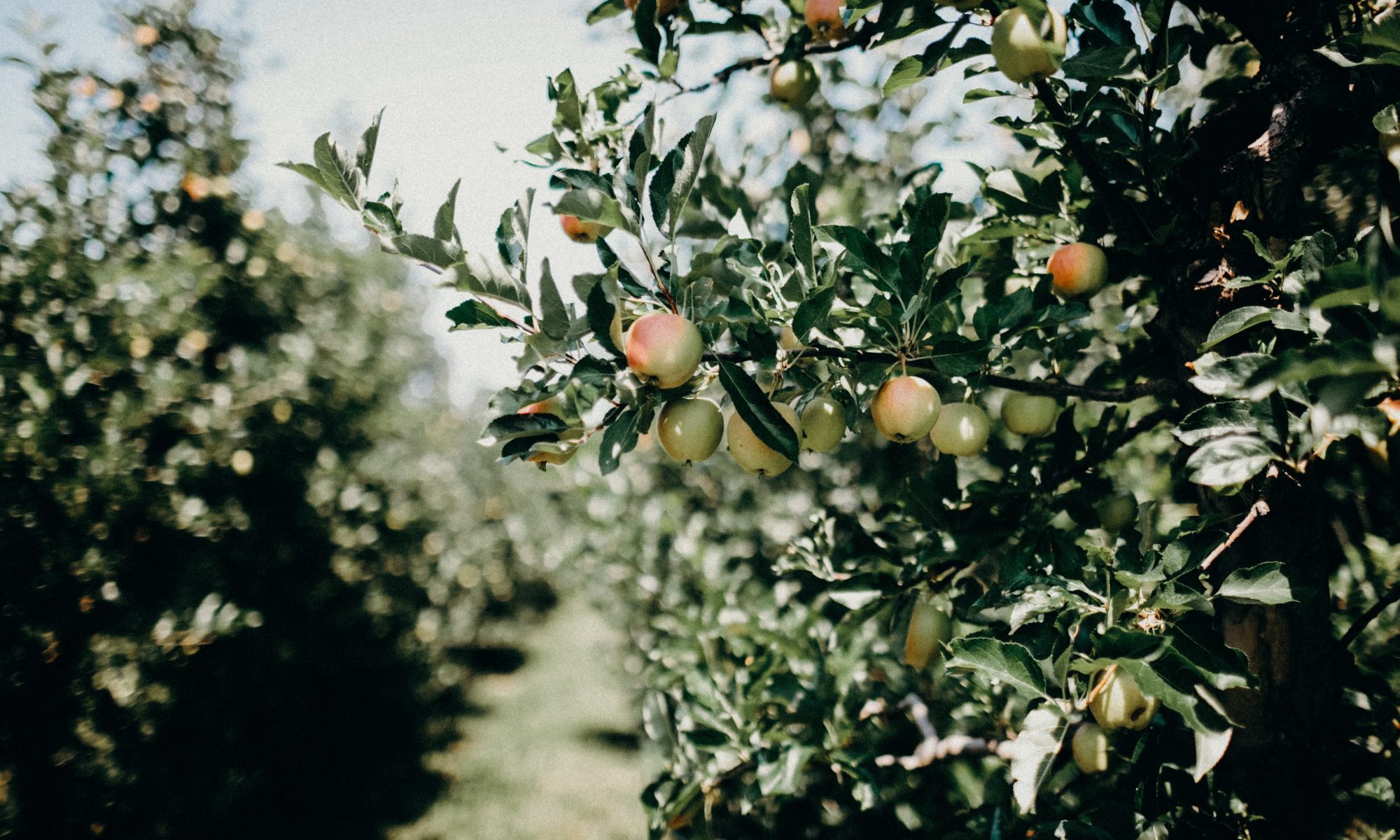 I had the opportunity to get an update on the carbon offset program at Oneka Farm. After the 2017 Living Soils Symposium, we partnered with Oneka and DocTerre to offset all the carbon footprint of the Symposium. This summer, on August 4, Oneka Farm offered a Field Weekend (Weekend Champêtre) with farm tours, workshops, yoga classes and more. I attended a workshop with Vivian Kaloxilos of Docterre, where she explained the work she is doing with the Choinière family (Oneka owners) to restore the soil ecosystem and offset the carbon footprint of the Symposium and now of the Oneka businesses as well.

We saw the poplar and fruit tree borders which had been planted around the farm to offset the carbon emission from the 2017 Living Soils Symposium. Then we went to see a field which had been a conventional apple orchard for decades but has recently been cut down.

A new orchard will be planted next year to offset the carbon footprint of the Choinière businesses. Now Docterre is working with them to prepare the land for a transition from a conventionally managed orchard to a regenerative, organic one. The first parcel we walked through is a control plot. Nothing has been done since the trees were removed. Next to it is the plot where the soil is being remediated in preparation for planting.

Important steps before planting the orchard: regenerating the soil with  cover crops

The first step is de-compacting the soil. A cover crop of sorghum Sudan grass was planted this past spring along with an inoculation of multi-species mycorrhizal fungi. After many years of fungicides being used on the apple trees, it is important to re-establish a population of healthy mycorrhizae before planting more trees. Many crops, including grasses, depend on associations with mycorrhizae in order to extend the reach of their root systems in gaining both nutrients and moisture. But the woodier a crop, the more it needs its fungal companions. Forest soil naturally has a much higher proportion of fungus to bacteria in its microbiome. If you want to grow tree crops with minimal inputs, it is very important to build a fungally dominated soil microbiome.

Sorghum Sudan grass was chosen because it is fast growing and deep rooted. We could easily see that there is a lot more biomass in the plot with the cover crop than in the control plot beside it. The below ground biomass will penetrate through the compacted soil horizons allowing deeper penetration of water and beneficial microorganisms. It will also add a lot of organic matter deep into the soil. The grass will be cut twice before fall, stimulating its growth, and the cuttings will be left on the ground to add even more organic matter. In the fall it will be cut down to the root and lightly scratched into the soil to make room for a fall cover crop. Next a cover crop mixture of vetch, winter rye and peas will be sown along with a compost extract to help with the decomposition of all this organic matter over the winter. This next cover crop will also help with the diversity of the soil microbiome and add in important nutrients to the field.

In late spring, the over winter cover mix will be cut down and after a shallow surface till, a third mix will be sown in of red clover, oats and tillage radish along with an inoculant of nitrogen fixing bacteria. The clover be a host for the nitrogen fixers and allow them to reproduce and spread through the field. The tillage radish will break any compaction the sudan grass might have missed as well as add lots of great organic matter content into the horizons of the soil. The oats will bring in great nutrition into the soil system. With the massive input of diverse organic nutrients from the cover crops and the nitrogen fixers getting free nitrogen from the air, the ground will be ready to receive the young apple trees with very few additional inputs per acre.

Planting the apple trees in 2020 with compost tea and mulch to allow the microbiome to thrive!

This last cover crop will be cut and left on the ground before the oats go to seed. The apple trees will be planted in early summer 2020. The last cover crop will create a basis for the permanent ground cover in the orchard. There will be additional complementary plants added to complete ecosystem functions in the orchard. Long term management of the orchard will include mulch of woodchip/ aged rameal wood fragments and specialized compost tea treatments to build an optimal soil microbiome for apple trees. All of this will create a truly healthy ecosystem which will sequester significant amounts of carbon and require very little inputs. It will go along way to offset the carbon footprint of the Choinière family businesses. The family is working with Arbre-Évolution to plan and account for their carbon offsets. They have calculated that it only costs 1% of their profits to compensate their carbon footprint and their battle cry is ‘’Let’s raise the bar!”.

Regeneration Canada is proud to showcase its members Oneka and Docterre’s regenerative initiatives.

Want to share your businesses initiatives? Become a member and join our community!