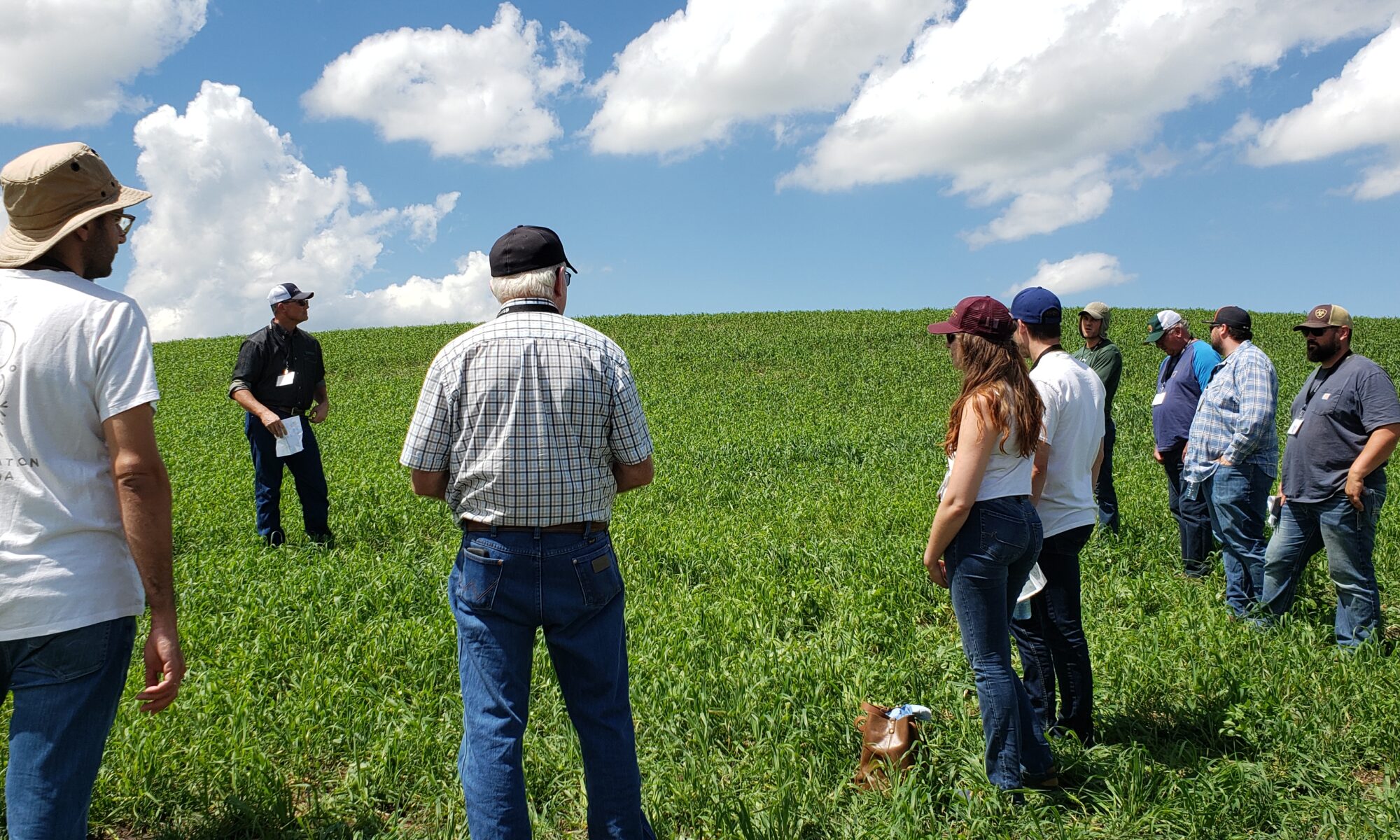 On July 6th, 2022, Regeneration Canada, in partnership with the Saskatchewan Soil Conservation Association (SaskSoil), hosted a Producers’ Field Day in Minton, Saskatchewan. The day of learning and sharing started at 9:30 as attendees began to register. After everyone networked over coffee and muffins, our guest speaker Joel Williams (of Integrated Soils) gave an enlightening presentation to the crowd of 50. He covered topics such as the importance of biodiversity, highlighting that diversity above ground is important for improving biological activity, soil productivity, and creating a more diverse ecosystem. This led to a discussion of intercropping, perennial strips, and crop rotation. Joel also taught us about the separate ways to approach rotational grazing as well as their effects.

After a communal lunch, everyone loaded onto a bus for the afternoon tours. We began at Box H Farm, which is run by Mark and Laura Hoimyr. Out on the farm there was a soil pit and a cover crop. At the former, Joel Williams hopped into the pit and explained what was going on beneath the plants. You could see the roots had been able to penetrate deep into the clay loam soil with many aggregates. Joel pulled a piece from the pit walls to be passed around and everyone got the chance to smell the rich earthy soil. At the cover crop, Mark Hoimyr explained the green, diverse cover crop that we were surrounded by. He talked about the history of the field and why he decided a cover crop consisting of oats, forage peas and rye was the best choice for the soil. The soil had become less productive so in hope of improving productivity of the soil and plant growth, the cover crop was seeded this spring.

Our next stop was a pasture where we were able to see the Hoimyr’s strip grazing in action. Mark explained the system where the cows are allowed a new section of pasture every couple or few days. Laura then demonstrated this as she moved a temporary fence to allow the cows to enter a new plot of grass. They concluded by giving a demonstration of the automatic fence riser Mark had built to help the farm with their grazing.

The following destination was Axten Farms, which is run by Tannis and Derek Axten. We gathered at a field that had just been grazed and was about to be seeded to a cover crop, where Derek presented the K-Hart Spyder drill they use to seed the cover crop. He made a few passes with the drill to show how little soil disturbance it creates.

The final stop of the Producers’ Field Day was to Axten Farms’ Seed Cleaning Facility. Derek told us about the journey that had led them to install the facility. It started with intercropping and needing a way to separate the seeds, which led to learning about food-grade seed cleaning plant possibilities. The Axtens now have their own certified food-grade seed cleaning plant that only uses their grains, which is value adding. They are also installing a flour mill, which piqued a lot of people’s interest.

We then made our return to Minton, where there was a chance to network over local products: beer from Rebellion Brewing Co and meat sticks from Western Prime Meats. It was a fantastic way to end the day and continue the important conversations about regenerative agriculture.

Find these two farms and more on our map of regenerative farms!

The Producers’ Field Day was made possible thanks to our generous sponsors:
K-Hart Industries, Garratt Industries Ltd and Farm Credit Canada.

Kate Axten farms with her family at Axten Farms. This summer, Kate is working as a Communications Agent with Regeneration Canada to gain a better insight of stakeholders and practices of regenerative agriculture in the Prairies.